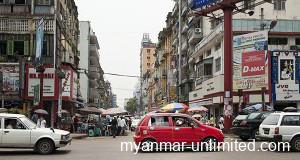 Myanmar has many reasons to celebrate. As recently as nine months ago, nobody would have dared to predict how openly the election campaign for parliament on April 1st would be held.

How was it possible to hold these elections and to bring about changes like freeing political prisoners, allowing more freedom of speech and of the press than ever before? How does the Myanmar Spring differ from the Arab Spring as we know it? While the latter was initiated by the people, the former was started by the government. It allowed national elections in 2010, although they were not fair. Yet it brought forward a change in leadership that made the subsequent changes possible. The reasons for political change in the country are manifold. We have read about them extensively in the media.

It is enlightening to talk to people in the street about how they see the future of their country and how they prefer to deal with the past. It is a lesson in humbleness, wisdom and the art of forgiving. Whenever I asked people what they would ask or say to opposition leader Aung San Suu Kyi if they had a chance to talk to her in person, most simply wanted to wish her good health and thank her for what she has done for the country. This is a far cry from the usual demands of citizens in Western countries on their politicians.

My second question concerned the old military government. How do they view the old generals now that they are retired and is there a desire for revenge and justice? Everyone is happy that they are gone but nobody wastes a thought about them any more. The attitude is usually, ‘They are retired, gone, let them be, let´s move forward.’ Instead of calling for revenge now that the old generals are retired, many people actually hope that the Western international community won´t want to bring them in front of the International Criminal Court in Den Haag. The Buddhist concept of justice is different: Karma will take care of this.

So far, the Myanmar spring doesn´t include protests but expressed itself in the form of cheering and dancing in the streets, celebrating the victory of the opposition party NLD in the by-elections in April.

The government has lowered the taxes on cars, altering the picture of street life. The first blossoms of spring appear in the form of the red, green or yellow Myanmar Minis that whizz through the streets like little colorful dots in an otherwise dull mass of old or even antique vehicles. With these signs of spring in Myanmar, I am very much looking forward to the summer!