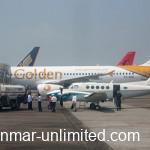 April 2013. Recent changes in Myanmar can be seen wherever you go, especially in Yangon. The cityscape these days is mainly made up of  scaffolding, cranes, construction fences depicting posters with soon to come new highrises behind them (mostly hotels), new shopping centers, a new fly-over trying to de-congest the traffic (more or less successful…). So I wasn´t too surprised to see yet another domestic airline pop up at the airport, “Golden”, the Shwe airline in a country where gold is ubiquitous and important. More and more international airlines offer flights to not only Yangon, but also Mandalay and probably soon Bagan. What will be next? No more embargo by the EU……. new airport….a Coca Cola bottling plant (near the new airport)….new embassies… more delegations of business people and politicians….more tourists…..